Virtual reality (VR) and augmented reality (AR) have become major players when it comes to the future of not only gaming but marketing, e-commerce, education, and many other fields as the technology used in both enables users to experience an incredible amalgamation of a virtual world and a real one with enhanced visuals. Now online gambling sites and their associated casino games have a big piece of the action.

Online gambling and casino games have come a long way since they first appeared on the world wide web as developments in technology have allowed software developers to create amazing casino games with unrivalled graphics, animations and other features allowing players a fully immersive and realistic experience of casino games, with VR and AR taking the online market to a whole new level.

PC Mag gives an insight into what VR and AR actually does, describing VR as using headsets which completely take over your vision to give you the impression that you're somewhere else. Headsets such as the HTC Vive Cosmos, the PlayStation VR and the Oculus Quest work to completely block out a user’s surroundings and fill the field of vision with whatever is being displayed on the screen. This ranges from interactive games, through 360-degree videos to now include casino games as the real world is replaced by a virtual one.

The advent of VR has brought with it a wealth of possibilities as it replaces everything around the user’s surroundings with something completely different - it is no wonder the development has been taken into the thriving world of online casinos. External sensors and cameras alongside the use of motion controllers allows the user to move around in a virtual space with virtual hands - perfect for placing your best bets today in a virtual casino world. 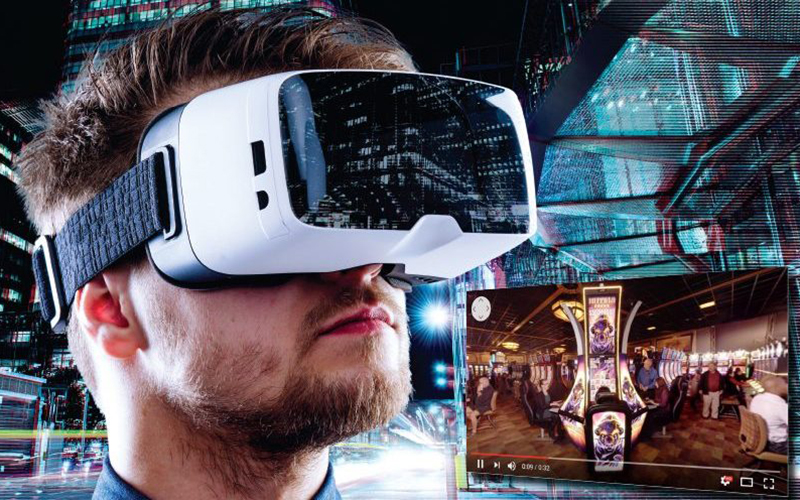 An exciting future lies ahead for VR/AR gambling

Meanwhile, AR goes one step further by using its genuinely limitless possibilities to add a virtual world as an extra layer on top of the users existing surroundings - this technology is designed to allow the user to move around freely as it superimposes images over the surroundings. Apps and games such as Pokemon Go are perhaps the most prolific and well-known examples of this technology, as they use the camera of your smartphone to project their own additional world over the real world on the screen.

AR displays can offer something completely new to online casino gaming, providing data overlay on screen that is limitless in terms of what it can include - anything from the time of day to something a little more complex such as real-time statistical data, which any player will welcome in the world of online casino gaming as they continuously look to maximize their opportunities for big wins.

Although users can currently play in virtual reality casinos already, the developing technology offers further improvements and opportunities for a vastly more immersive gaming experience which can even include the use of digital currencies to place bets.

AR casinos are arguably easier for software developers to manage than using VR technology for casino gaming because, with AR, all that the user requires is their smartphone - there is no need for developers to create immersive virtual worlds in which to play; the world is already in front of the user - it just has an overlay of people, sounds and objects added on screen to the user’s real-life surroundings.

With the ease of AR technology, more so than VR, there is a real possibility of sitting in any real-world location and having dealers, tables, cards, chips and other casino players right there with you - even on the toilet in your own bathroom! Users will be able to experience everything they could possibly experience in a real life casino once this technology is fully ready and implemented for the world of online casino gaming.

Augmented reality on a smartphone

How users play casino games online is rapidly changing thanks to the technology behind both AR and VR which provide a huge improvement to the experience of casino gaming without actually needing to be physically inside a casino. A virtual experience a whole level up from simply playing games whilst waiting for a bus or sitting on a subway watching on your 2D screen smartphone is now at the fingertips of any casino player, novice or expert, whenever they wish.

Yes, there are issues to overcome - predominantly surrounding the end cost to the user by having to purchase the necessary headsets, whilst the availability of online casinos that use the technology to offer this experience to their valued customers is currently limited. However, there is definitely an interest amongst investors, operators and players in having a fully-immersive VR/AR casino gaming world. For now though, this form of online gambling will remain on the periphery until the availability and the cost of the technology improves - its a case of keeping your cards close to your chest until the decks are dealt out when it comes to VR and AR gambling.